How We Hacked the Airbnb experience with AT&T, HP, and Intel

What if your Airbnb guests arrived to stay at your house, and you weren’t there to let them in? Well, a team of xMatters engineers competed in the AT&T Developer Summit Hackathon in Las Vegas on January 2-3 and created a new app to make Airbnb safer and more convenient when the host isn’t there to open the door and welcome the guest.

Our team’s popular entry did the following:

The app was very well received by the judges and many came to us personally to express interest and enthusiasm. I’ve been in situations where I’ve had to wait to meet an Airbnb host after a long flight and I would have loved it if an AirDoorman could have let me in. From the host’s side, not leaving a key under the mat or needing to change the combination of the lock box made for a safer and more secure transaction. Heck, the host could be in their other house in the Caribbean, safe with the knowledge that the guest was able to easily enter the house without exposing the property to unnecessary risks.

Working with leading brands underscores what xMatters delivers: an enterprise-grade communication platform that delivers the speed and flexibility of a standards-based API.

We earned a $10,000 First Place for the use of AT&T’s Web RTC video chat API, another First Place (and $5,000) for the use of HP’s face detection API, and… each team member also scored an Intel Basis Peak multi-platform fitness watch. 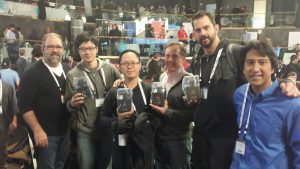 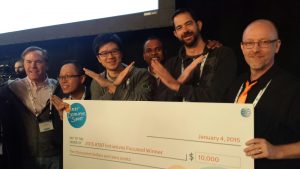 Fueled By Tech and Sugar

To create the app, Team AirDoorman used six APIs, many pots of coffee, and enough Red Bull to float a large buoy. The team consisted of developers Travis DePuy, Jan Shim, and James Leung and Alliances Director Jim O’Loughlin provided some of the sales phrasing and moral support. We all worked until 4 a.m. – except Jan, who used eight Red Bulls to fuel his workday until 7 a.m. and we all regrouped at 8 a.m. to put on the finishing touches!

Pizza at midnight and a box of doughnuts supplied the rest of the brainpower. So. Much. Sugar! Well, $15,000 oughta take some of the sting out of it.

How We Included WordPress in Our Google Cl...